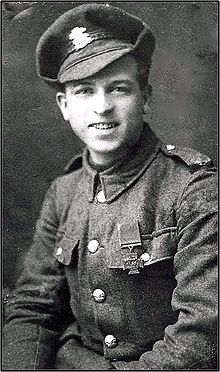 Stokey Lewis was a private in the 11th Battalion Welsh Regiment and in October 1916, at the age of just twenty, he was stationed out in Salonica.  The opposition facing him consisted of the Bulgarians and elements of the German army.

On 23rd October 1916 a raiding party of the 11th Battalion Welsh Regiment attacked German positions on the Dorsale Ridge above the village of Macho Cova.

Stokey Lewis was in "D" raiding party under the command of Captain Guthrie Morgan.  They advanced up a terrifically difficult rocky slope and as they appeared over the top of the slope a German lookout spotted them and immediately opened fire.  The 11th Battalion raiders were held down for a length of time before finally making a dash into the German trenches.  Casualties were taken by members of the Battalion and Stokey was wounded twice.  While searching the enemy dugouts, Stokey came across three German soldiers in the trench.  Stokey immediately attacked them using his rifle butt and bayonet, knocking down two of the soldiers, with the third soldier surrendering.  This incident was witnessed by Captain Guthrie Morgan and Corporal John Nicholas of Swansea.

Stokey escorted the prisoners to a collection point before the order was given for the 11th Battalion Welsh Regiment raiders to withdraw.  As this was happening, Stokey noticed Lieutenant Turner lying wounded on the ground.  Stokey picked up Lieutenant Turner, carrying the injured man over his shoulder and carrying him down a ridge for two hours.  Upon entering the British lines, Stokey was seen to lay down Lieutenant Turner and walk away before collapsing.

Stokey Lewis received the Victoria Cross from His Majesty King George V at Buckingham Palace on 5th February 1917.  The Victoria Cross is the very highest and most prestigious award for gallantry in the face of the enemy that can be awarded to British and Commonwealth forces.

Stokey is the only Pembrokeshire man to receive the Victoria Cross.  Stokey was also awarded the Médaille militaire by France.

Stokey is laid to rest in the Milford Haven Cemetery and a Memorial plaque and sundial in his honour can be found in the Memorial Gardens in Milford Haven.

Thank you to http://www.bbc.co.uk/blogs/wales/entries/fd196ceb-7d28-3d33-9513-ff795c8a878f , contributors to Wikipedia - Hubert William Lewis and Memorials to Valour for the information and pictures.  A portrait of Stokey, together with a written tribute (from which I have also taken information), can also be found in the Committee Room in the Town Hall. 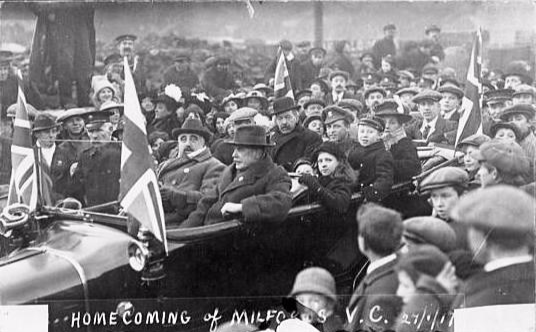 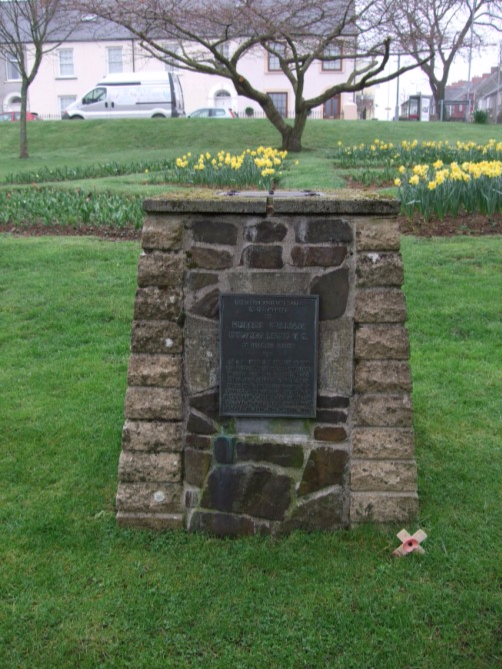 Memorial to Stokey Lewis VC at the Memorial Gardens

On Saturday, 22nd October, 2016, a Service was held in the Memorial Gardens at 11:00 am to commemorate the 100th Anniversary of Stokey Lewis receiving the Victoria Cross for his outstanding valour in the face of the enemy.  Father Edward Le Brun Powell from St. Katharine and St. Peter's Church officiated at the Service.

Please take a look at the photographs below